Our month in Mamelodi would not have been the same had we not set a strict budget for ourselves, a budget representative of what many in the same context live by. In line with this reasoning we decided to try and live off R100 per day or roughly R3000 for the month (based on the median black individual income of R2167pm as per the 2010 stats SA data[1] and extrapolated to an estimated household median income). Due to family and friend commitments, our month was not quite the full month as we moved in on the 4th and left on the 30th of August so to be fair we revised our actual budget to R2700 for the month. Our expenses came in as follows: 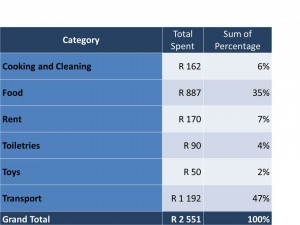 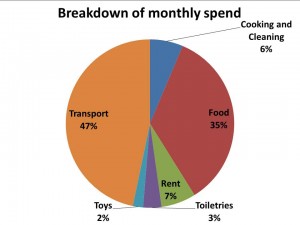 This picture shows us a glaring problem. 47% of our disposable income was spent on transport. And transport costs have gone up enormously over the past few years.

At the end of last year taxi fares were R12 for a trip; they are now R14 and will go up to R16 in the next few weeks. This 33% increase where transport constitutes 47% of your budget translates into a roughly 16% annual inflation number if everything else stays unchanged (which it hasn’t): way above the 2012 CPI of 5.75% and significantly above the raise most people give their workers on an annual basis.

In light of the extremely heavy weight of transport in our budget mix, we have decided to strip out transport costs from Leah’s wage from now on to more effectively align her efforts to her pay rather than her being disadvantaged by transport costs.

We struggled to get by on the median income and yet the definition of a median income is that half the people in that context earn less. You will also notice that our expenditure list excludes items such as furniture and fixture costs, school fees, school uniforms, cell phone minutes, travel to and from funerals, sending money home to family, supporting a large extended family etc. These are all real costs faced by the workers in a community.

Had we needed to cover any of these expenses, it would have pushed us over budget. Small wonder then that micro lending is a thriving township business (often not at all sustainable resulting in debt traps) and that stokvels (group saving schemes that are actually quite a good idea if all the members diligently contribute) are often used to cover some of these incidental costs.

In 1994 South Africans were all granted democratic freedom and equality but now, 19 years later economic freedom is still a distant wish/goal for many. Although Julian and I disagree with Julius Malema’s policies he points out many real problems faced by the people in this country that have yet to be adequately resolved. Economic freedom is something that is still a pressing problem in this country that should concern all of us. If not, it will increasingly become the playground of populist leaders.